During the week my husband caught a baby rabbit hiding on our back porch.  We were so excited that we didn’t take pictures that first time.  We have seen the rabbits out in the yard before but never have caught one in the 3 years living in this home.

After we let him go we remembered about the camera and thought for sure we were not going to get another chance at a picture, we were wrong.  The next day my husband was out going to grill again and sure enough saw the lil fella again.  It was much easier catching him the second time around, as he knew just what to do.  He came in excited to show us he had the bunny again.  This time we took pictures before releasing him back into the yard. 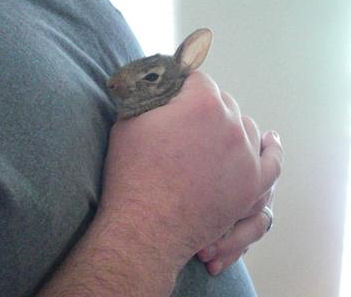 Well, now the kids want a pet rabbit, so maybe after some thought we will get one.