Great way to start your day poached eggs, grits and sausage and cheese, my kids love it.  See my primitive attempt at using picnik.com above with my picture.  I like it but I can do better with those pics I know hehe. 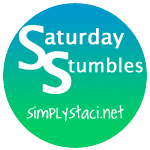 Weill I have been a tad bit lazy this week, took a few days off.  I have even taken a few weeks from Saturday Stumbles, but I miss it and will continue to do them because they are FUN to see what everyone finds.

Here are some of the fun stumbles I ran into this week.

1.10 (Cheeky) Tips for New Moms loved these made me chuckle a bit

2.Make It : Birthday Candles note to self make some of these for the next person in my life to have a birthday.

3. The Ultimate House Cleaning Calendar Cleaning I know I am not wanting to think of that now either.